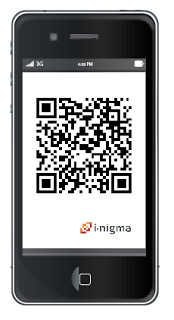 Do you know what a QR code is? No?

As a smartphone owner, you really should. Why’s that? Because being able to access QR codes from your mobile device can provide you with access to an Aladdin’s cave of free gifts, special offers and invite-only sites and services.

By scanning a special barcode-like image that can be found on promotional packaging and websites or in magazines and newspapers you are granted access to a unique link that can unlock a plethora of exciting goodies accessed via your device. Yes, this is the point where you say, “Oh THAT’S what those things are!”

This futuristic technology isn’t new, however. The gadget-focused Japanese market has been taking advantage of QR codes for years now with offers ranging from access to the Disney Channel to sampling new drinks from Coca Cola via vending machines.

The tech
So how does it work? Well, that little camera in your smartphone that you might normally use for snapping pics of friends, family or that crazy guy you see on the subway is the key to QR code mastery. With the right software, a QR-code printed on any surface or screen can be spotted and analyzed by your device and then intelligently converted into a URL that triggers the offer or gift.

i-nigma is renowned as the world-leader when it comes to barcode scanning software with its reader installed on over 200 million devices worldwide. And it’s not just small companies taking a chance on this exciting advertising genre either, i-nigma’s clients include such heavyweights as HBO, Best Buy, the NBA, BMW and Calvin Klein to name but a few.

Applications
The “special sauce” that has lead to i-nigma’s success is its software that doesn’t just “translate” a code for the end user but enhances their experience. Fully compatible with Twitter, Facebook and other social networks, it’s the ideal viral marketing tool and a convenient way for print editors and marketers to enrich their content.   Think of this example; a magazine runs an article on the brilliance of a new Broadway show. Obviously, the writer offers as much description as they can but even his or her editorial chops can’t match actually seeing the performance for yourself. Traditionally, the writer would then include a link to a website like YouTube where readers could enjoy a video clip of the show when they have access to the web.

Sadly, however, web links are often clunky, complex affairs with all manner of special characters and odd mixes of numbers and letters that look ugly on the page and require effort and concentration to enter into a browser. Most will probably ignore that link. So what if there was a discreet QR barcode included on the page that users could quickly scan using i-nigma software on their phone or tablet? In the same time it takes to snap an image, they could be watching the video on their device without any of the hassle that comes from traditional weblinks.

New tricks
Of course, that’s just one example. Publishers, promoters and advertisers are constantly coming up with new and exciting ways to make the most of i-nigma’s tools and barcode scanning to open consumers to a whole new world of interactive entertainment and advertising, like Best Buy’s in-store QR codes that allow a user to read a review of a product while they’re standing in the store. McDonalds Japan even offers nutritional information via QR on the packaging of its hamburgers. The possibilities are, quite literally, endless.

Get involved
So how do you go about taking advantage of i-nigma’s barcode scanning brilliance? It’s easy, head over to the i-nigma site at www.i-nigma.mobi using your smartphone or tablet and the website will figure out the device you are using. You will then be shown how to access the i-nigma reader software be it on an App Store or available for direct download and you’re done.  You shouldn’t have to worry about compatibility either with software available for all major brands and handsets including Apple, Windows Phone, Android, Java and Blackberry. Once the software is installed, all you need to do is keep your eyes peeled for those unique codes that pop up all over the place online and in print.

With an explosion in QR code use in the last few years, largely down to i-nigma’s platform and services –  it’s unlikely that you’ll have to look very far!